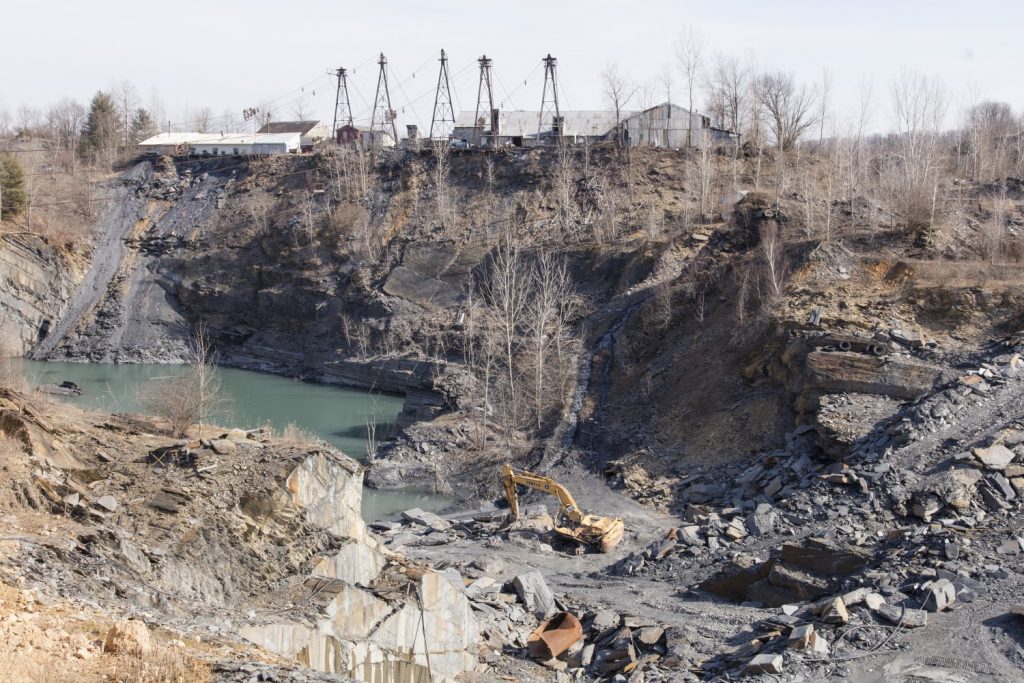 Photo Credits by Joseph E. B. Elliott of Josephelliottphotography.com

In 2002, Linda Hill, a business- woman/entrepreneur of Philadelphia, bought the Stelwagon Roofing Supply company. Established in 1853, this building and roofing supply company had deep roots in the Philadelphia community. Ten generations of Pennsylvanians had been served by or were involved with the company since its creation. This, she decided, was a foundation of inestimable value. The company was modernized and restructured with immediate success. By 2019, Stelwagon boasted five outlets in Pennsylvania and one in Trenton, New Jersey.

Looking for further investment she bought the John Roberts Slate Co, an established Philadelphia slate distributor, with strong ties to the Lehigh valley and Northampton quarries.

Lehigh and Northampton counties have a long history of slate production, beginning in the 1850’s. At it’s height in 1910, there were over 150 quarries scattered across the slate belt. Northampton county, specifically Chapman, PA, produced Chapman slate, a blue-black slate with flint striations running on the diagonal. Lehigh county, centered around the Penn Big Bed quarry of Slatington, PA, produced various slate types: Bangor, also known as Penn Black and Cathedral Gray being the best known. In 1959, however, the Chapman quarries closed and by the year 2000 only the Dally Slate Co in Pen Argyll, PA, and the Penn Big Bed company, in Slatington, PA, survived. They joined forces but their prospects were not good. Exorbitant operating expenses strained their operation to capacity and finally the hand of nature dealt the worst blow. In 2010, hurricane Earl devastated Pennsylvania, flooding the best and deepest excavations of Penn Big Bed. Quarriers are a resilient group, however, and over the next 10 years Penn Big Bed fought back. 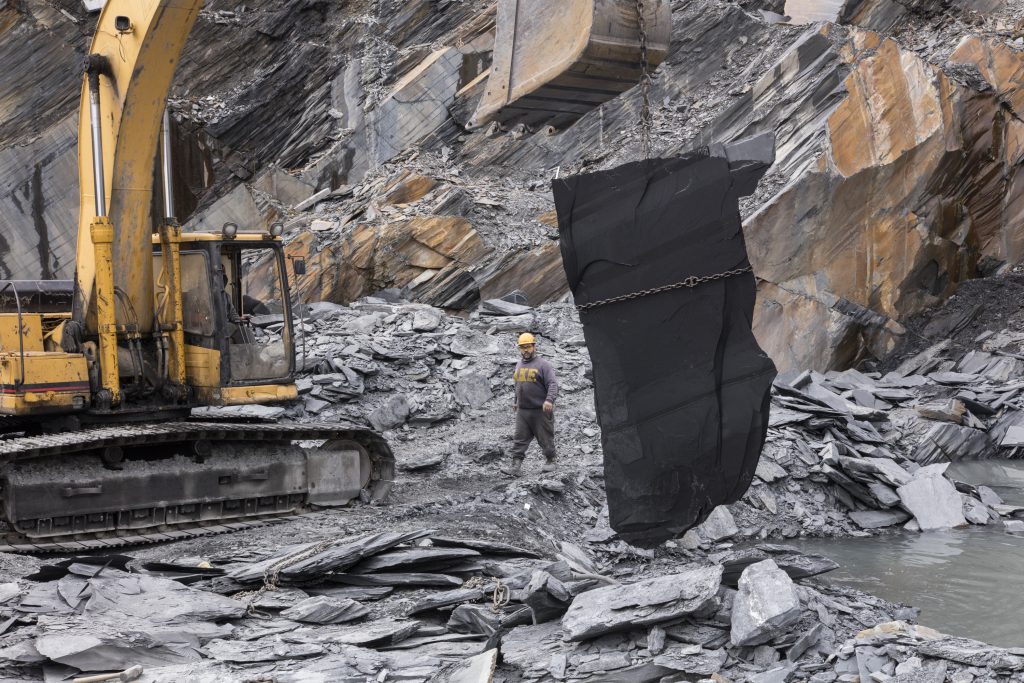 Hoisting slate with a backhoe 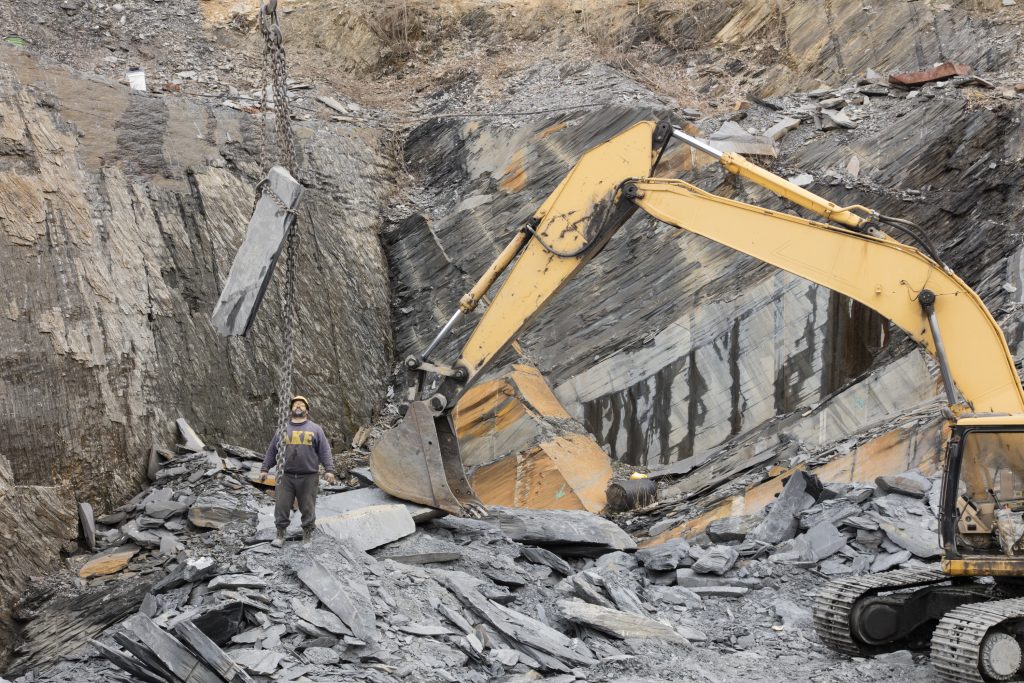 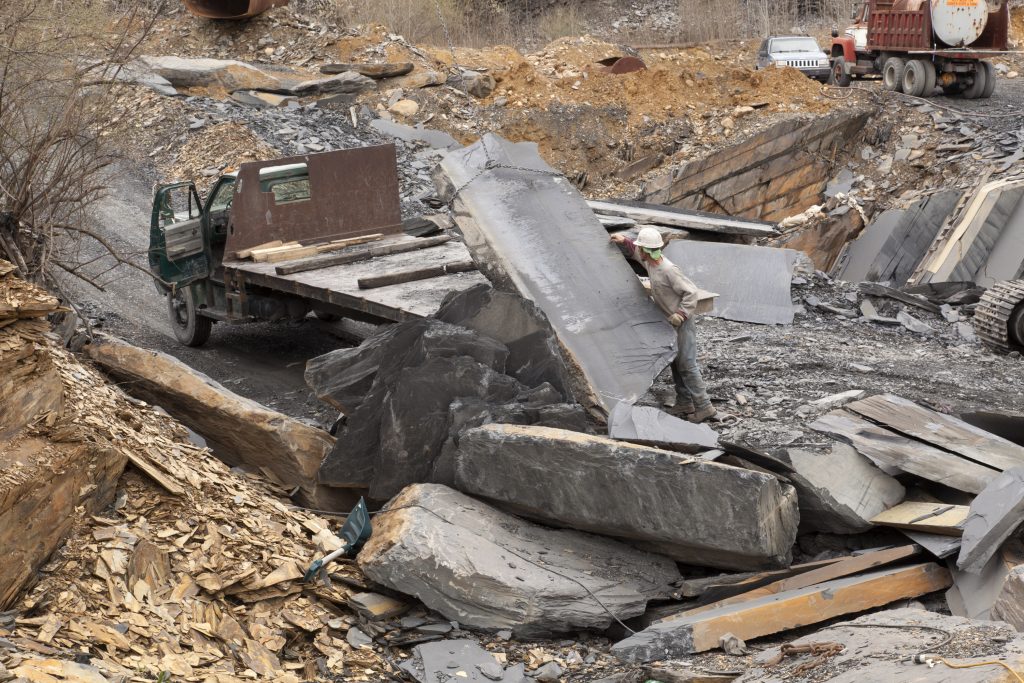 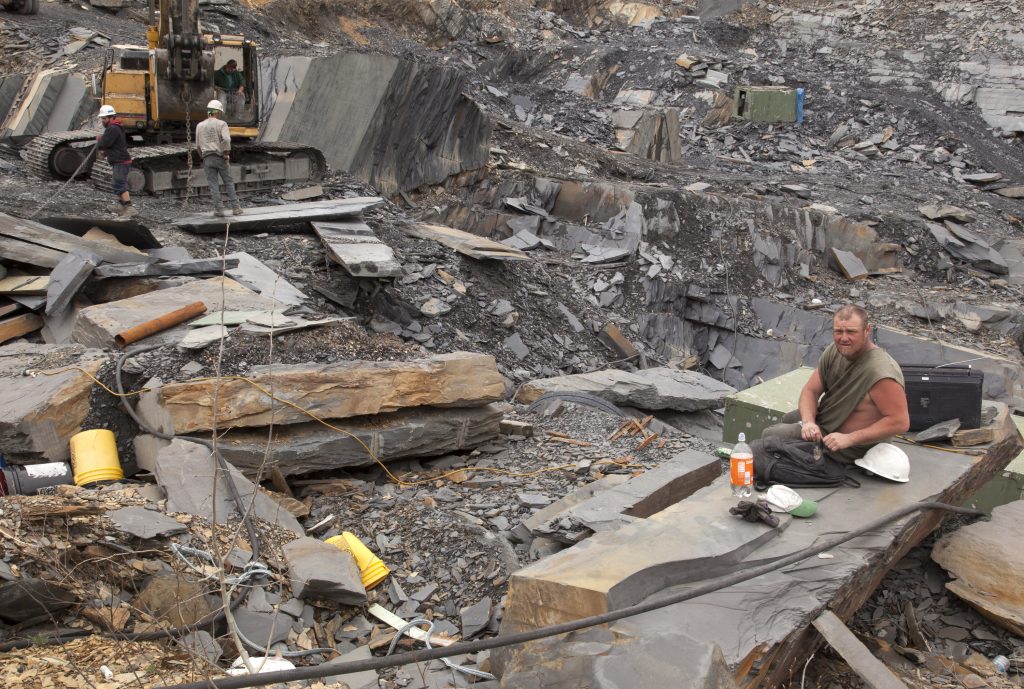 Break time at the pit 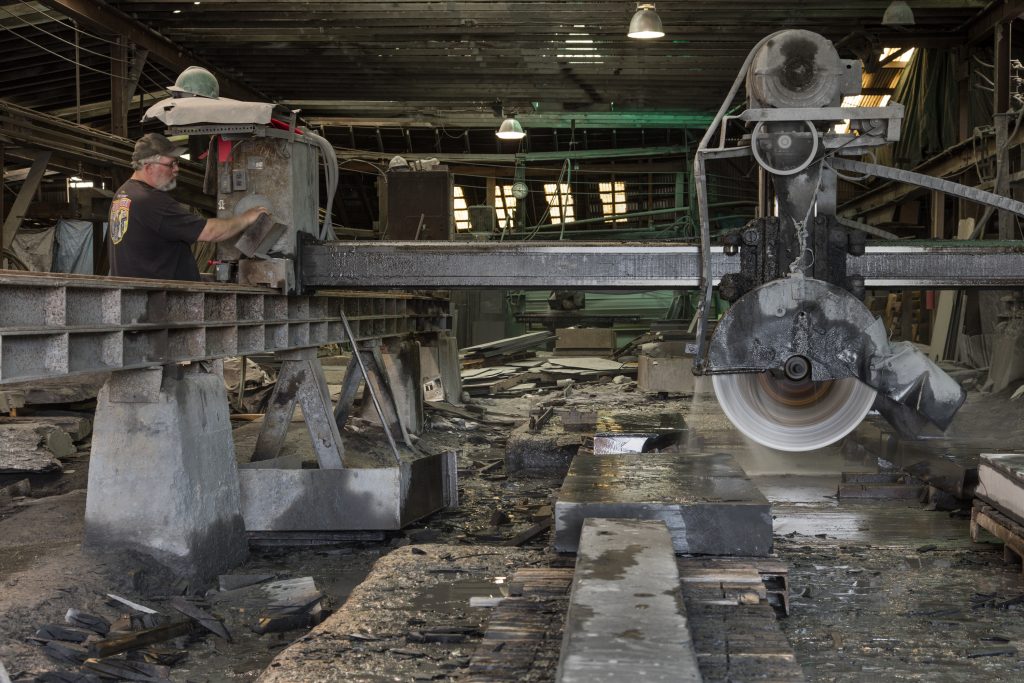 Pete Papay, fourth generation owner of Penn Big Bed, his son Pete junior, Eric Eitner and a small band of shop workers kept the quarry afloat, but soon there was worse news. Pete suffered a bombardment of health issues. It seemed the writing was finally on the wall and the next step would be towards the exit, when John Roberts introduced The Hill family to Pete Papay.

For the Hills, the attraction of the Stelwagon company had much to do with its deep roots in the community, and as they got to know Pete and Penn Big Bed, they recognized the same pattern. Many years of involvement with the roofing community, well-worn trade routes throughout the mid-Atlantic and a customer base of thousands, still Intact.

But there was homework to be done and in the next year they travelled to the established slate centers of the US: Vermont, New York and Virginia. Then further afield to Italy and Spain. They studied the trade and weighed the possibilities.

The slate quarrying industry is one of the most daunting. Once invested in enormous machinery, skilled labor and satisfying the most oppressive mining regulations in the country, quarrying can begin. However, only one of every three excavations, each one requiring six months to a year to establish, may produce a return. Of the good stone quarried, 95% will be discarded, 5% find use as slate. And there are obstacles, hurdles and pitfalls waiting around every corner. But, like falling in love, once smitten, there only seems one way to go. 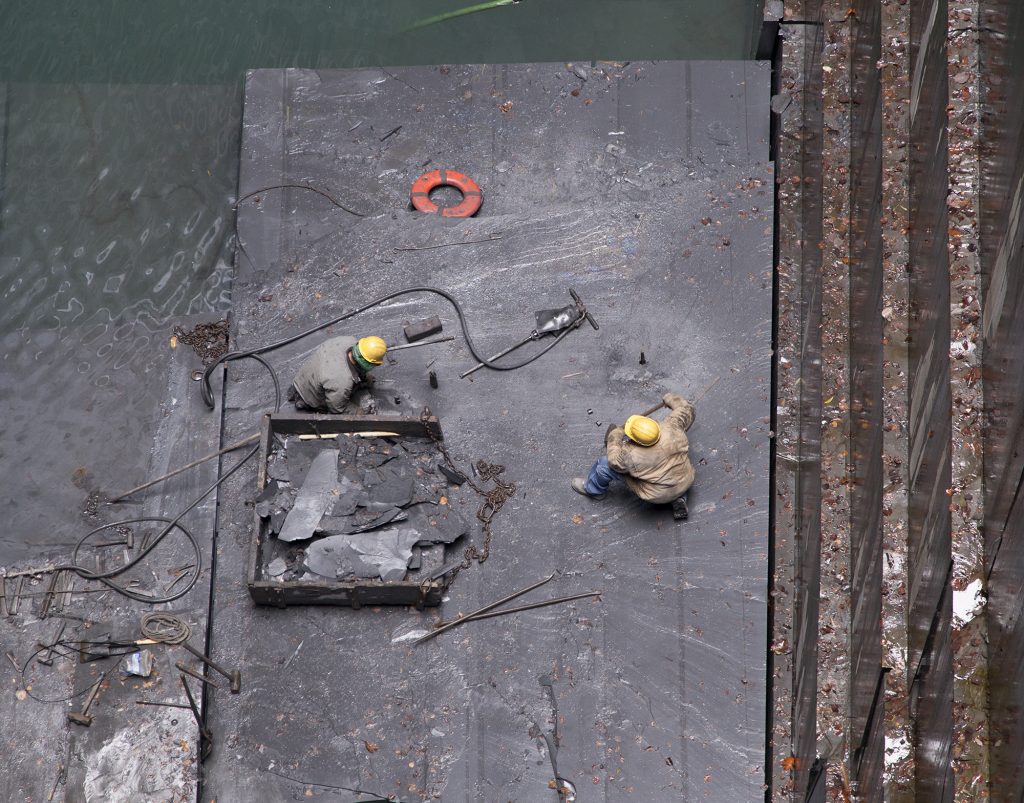 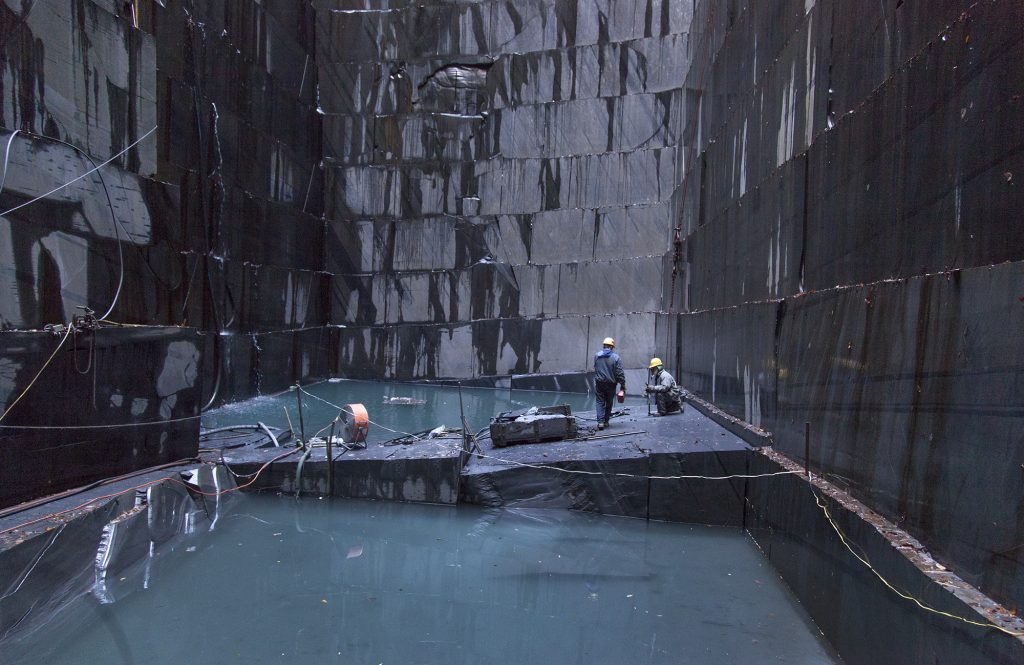 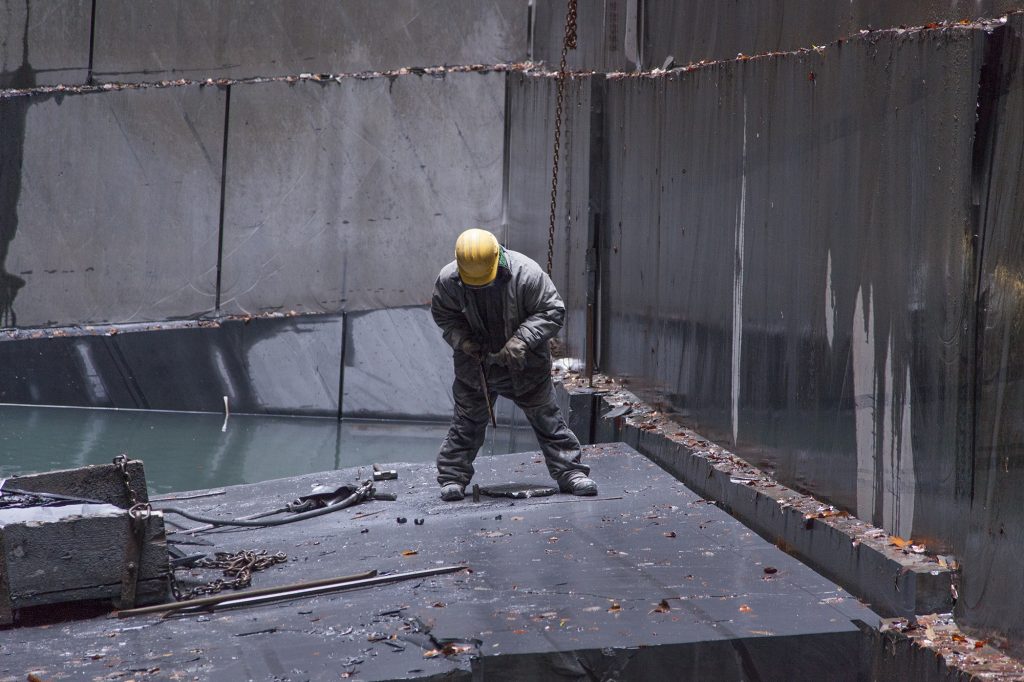 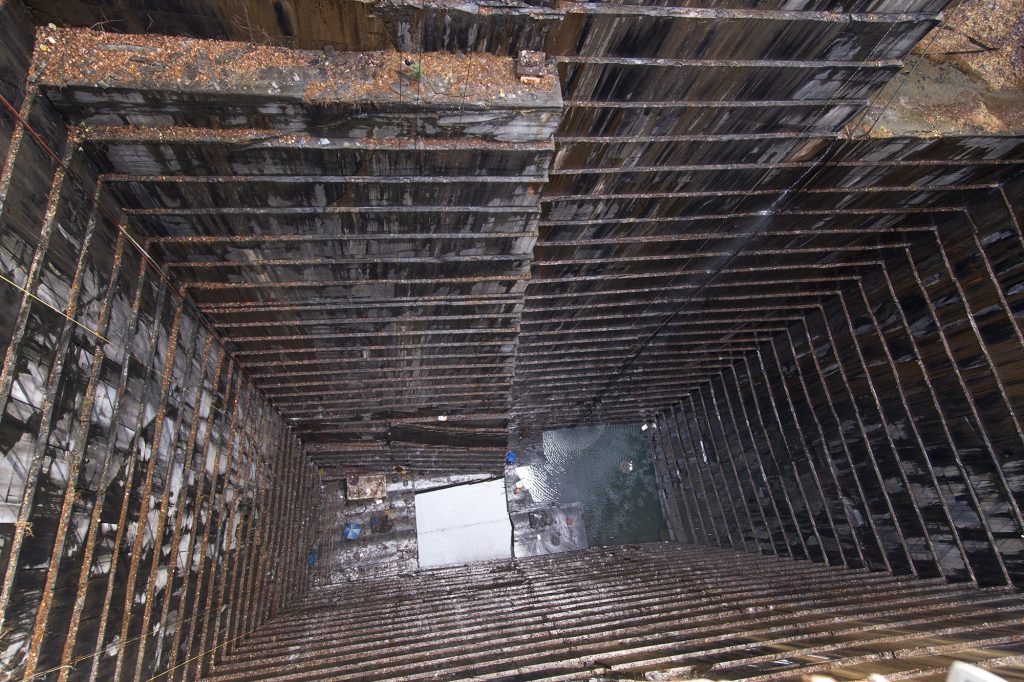 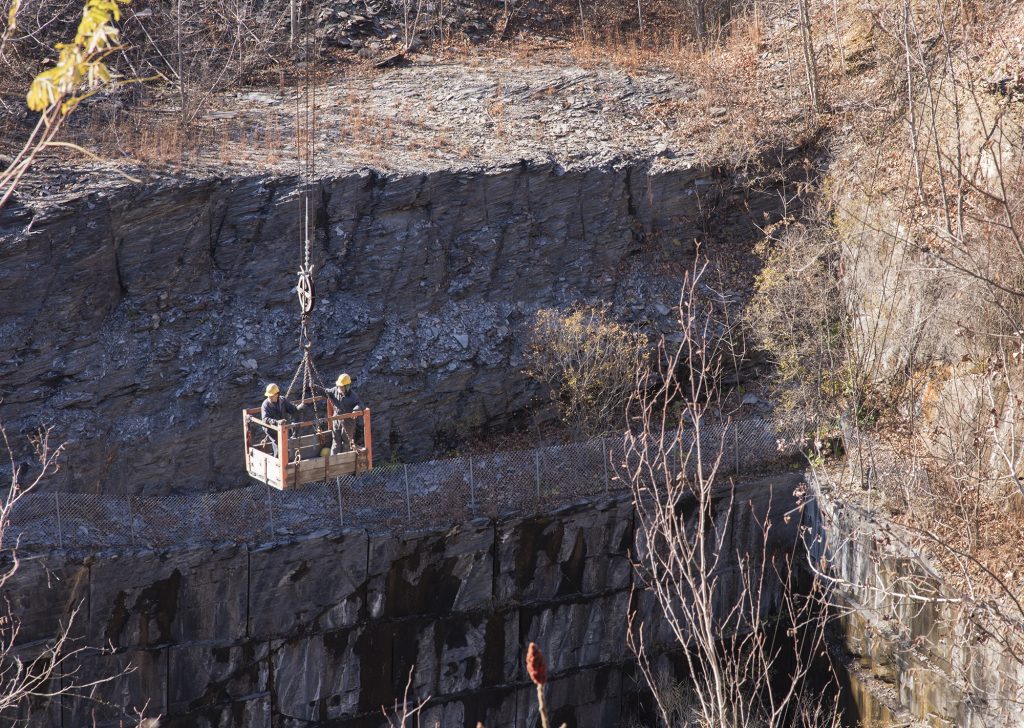 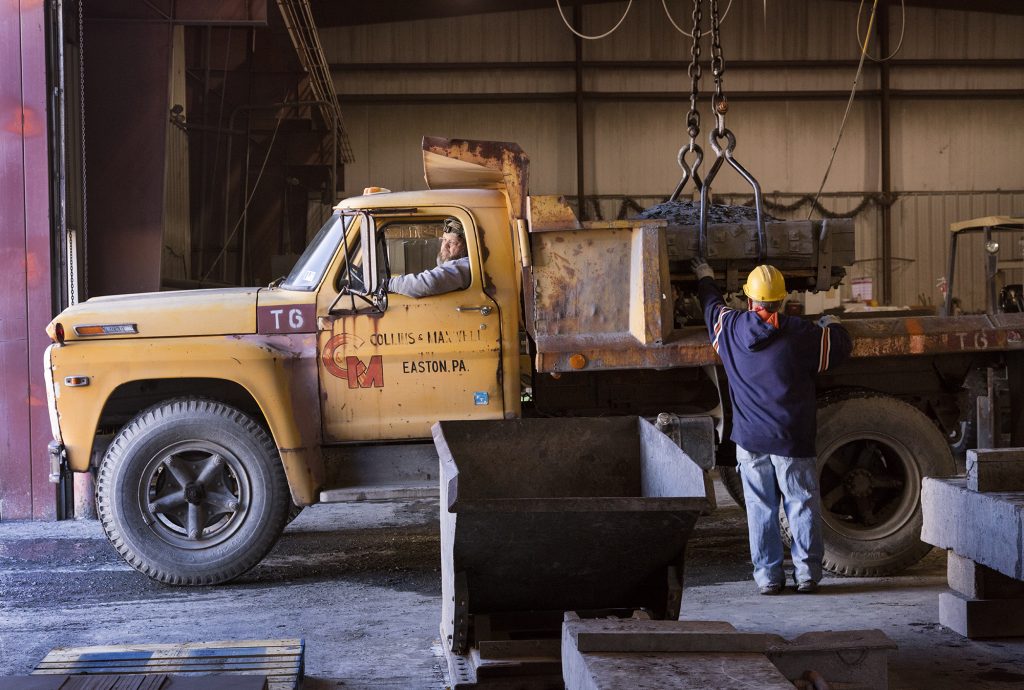 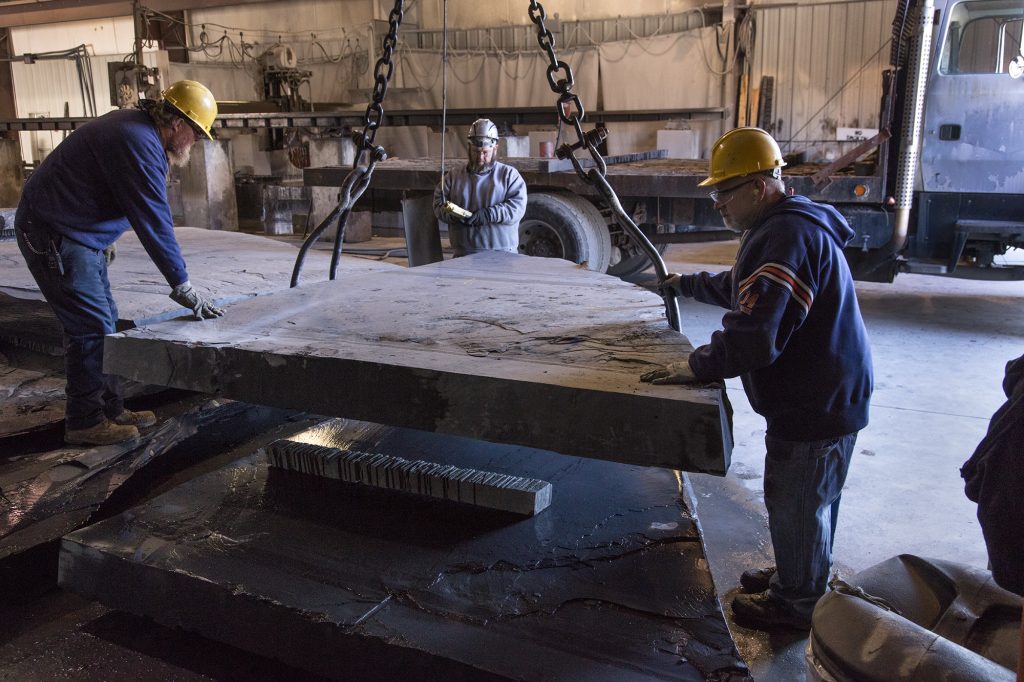 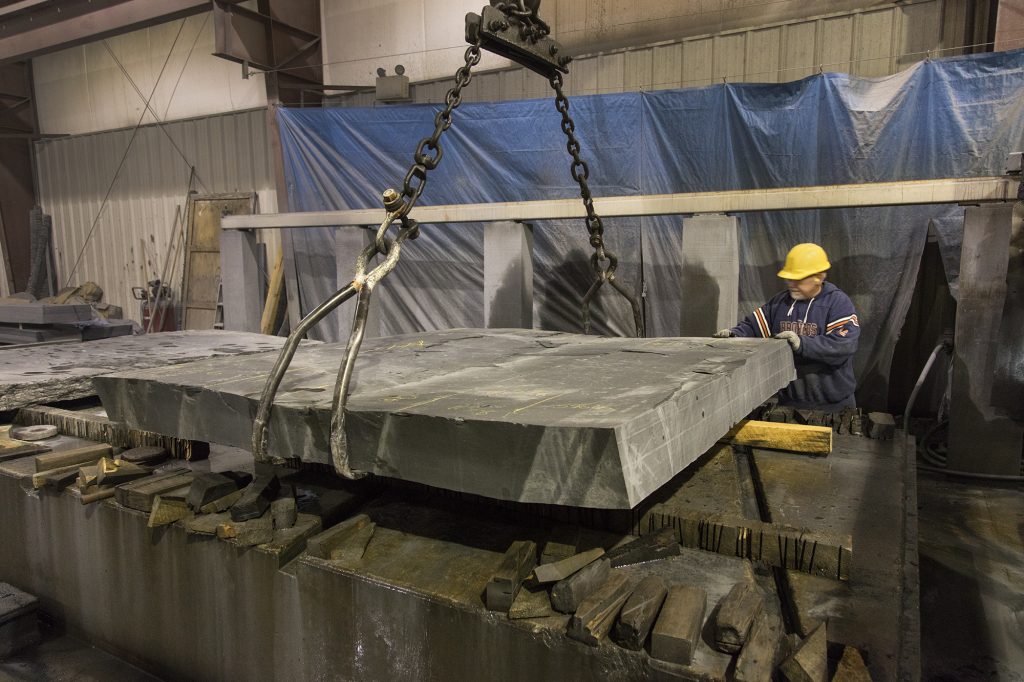 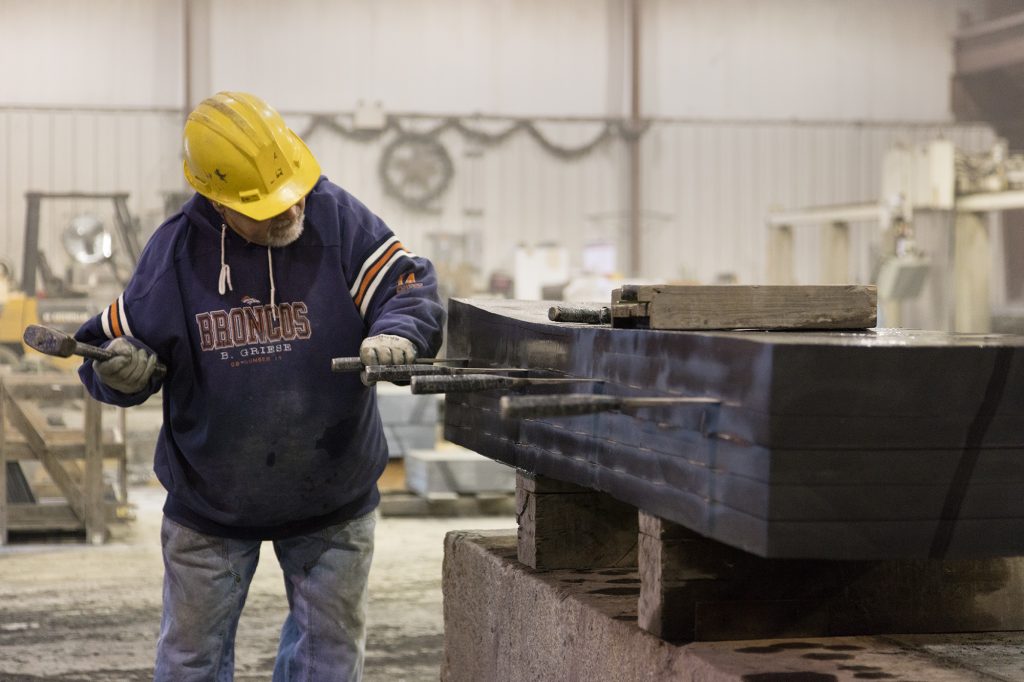 Immediately, investment began: buying new machinery; refurbishing machinery; rebuilding the plant; organizing the work force; permits; permits and more permits. In the past, as Pete Papay tells it, it takes a Welshman to find the slate, an Irishman to dig it up and a Czech to sell it. No doubt there is truth in this anecdote, but nowadays the requisites and tools have evolved.

Location. While situated in rural Pennsylvania, the quarry is in the hub of the mid-Atlantic: New York City, NY, Trenton, NJ, Philadelphia, PA, Baltimore, MD, Washington, DC. To the West, Pittsburgh, PA, Cincinnati, OH. The very reason it flourished in the past is still true today.

Transportation. Stelwagon already has a trucking capacity covering the neighboring five states and can easily expand their reach.

Market. The marketing area established by the Pennsylvania Slate industry is huge. New York State, south to the Carolinas. The Mid-Atlantic coast, West to Illinois. In this area exists over a hundred years of accumulated inventory- residential, commercial and historic. The slate repair industry is by far the most profitable, and they have a desperate need for a compatible slate supply.

Product Penn Black is a relatively soft slate that splits easily and has excellent planarity. It has many traditional architectural uses: floor tiles; sills; treads; counters; cladding. Of course, roofing slate has always been the mainstay.

Availability. The Lehigh valley is one of the richest geological sites in the United States. The hand-dug and blasted quarries through the slate belt have barely touched the resources on hand.

Stelwagon has stepped up to the challenge. To breathe life into a struggling but proud industry.

Congratulations to Stelwagon, and best wishes from the Slate industry of the United States.