Letter to the Editor

Contact Us
This is the original version of the letter sent to Professional Roofing — an edited version appears in the magazine’s August 2016 edition — written by NSA Executive Director, Tim Underhill with technical information and editing by Dave Large.

As Executive Director of the National Slate Association, I was deeply concerned by an article in the May edition- “Installation Check List for Slate roof Systems”-written by Dave DeRogatis.

First may I re-introduce Mr. DeRogatis, and anyone else interested, to the American Society for Testing Materials, as of 2001 renamed the ASTM International. This organization is responsible for providing critical testing for many industries, including our own. Roofing specifications are based on ASTM qualitative testing of materials, and, to give this testing meaning, these materials are specifically defined. Most testing concerns structural integrity and material durability with the goal of public information and safety.

“…a metamorphic rock…composed mostly of micas, chlorite and quartz…distinguished by slaty cleavage…which allows the latter to be split into sheets.

I start with this because Mr. DeRogatis states that “Slate materials have different burning speeds…”. Slate was welcomed as a roofing material in the late 1700’s for the fact that it was inflammable. Rock still doesn’t burn. The fire-testing for slate is contained in ASTM E108.

Uplift and wind-driven rain resistance for slate are tested in UL580 and ASTM. C1570. Mr. DeRogatis references TAS 107, “testing of Non-Rigid…roof system assemblies”. Not to split hairs, but slate is pretty rigid. UL 2218 is next referenced for “impact resistance”. Again, this is for “prepared discontinuous roof covering materials”. You could argue that slate was “prepared”, but 5 million years ago? They didn’t even have a word that big back then!

He could have cut to the chase, here! ASTM C406 is the Standard Specification for Roofing Slate: C120 for Flexure, C121 for Water Absorption and C217 for Weather Resistance. This has been around for a while! A thoroughly time-proven testing system. How much time? The lowest quality North American slate is a 75-year slate, the best (Peach Bottom or Buckingham, take your pick), still kicking 200 years later!

Mr. DeRogatis warns us “…what if the roof structure or building collapses under the weight…”. “ …real slate (?) products can weigh more than 1000 pounds per square foot!” I would LOVE to see that slate! That would have to be…well, a stalagmite? Not even. So, fact check: slate range from 500-1400lbs per SQUARE (100 square feet, but we all knew that).

I would like say that Mr. DeRogatis just mixed up his information-accidentally I’m sure-or didn’t fact-check. I’ve had many customers ask me, in all sincerity, “What exactly is slate?”, a fair question if you don’t know. However, the early mention of the Slate Bible and Joe Jenkins, a man who has devoted much of his life’s work to promoting slate, stopped me in my tracks. From there onwards I read with disbelief a thoroughly disingenuous conflation of slate and “synthetic slate”. The distinguishing qualities of slate were inferred to be those of synthetic slate; the short-comings of slate described as inapplicable to synthetic slate.

Mr. DeRogatis did a huge disservice to the Roofing Industry and ASTM International. The Industry already has a trail of failed “life-time” synthetic products, sold as slate look-alikes, with meaningless warranties. We deserve clear information. What in fact are the “slate materials” made of? Not a mention in the entire article! ASTM International standards are what the building community depend on. They are vital to the industry, to the safety of consumers, and not to be misrepresented.

Anyone interested in Slate Installation can go to the National Slate Association website, slateassociation.org and access our Slate Roofs Design and Installation Manual, an Award Winning publication. 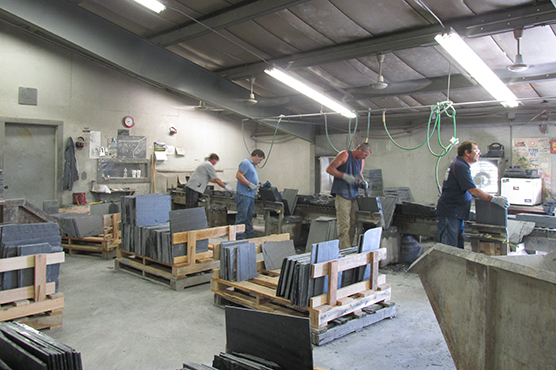